Get Schooled About School (And Teachers)

There is a dark, murky underlayer when it comes to teachers and education. Sometimes the revelations will make you gasp. Sometimes what is revealed is so horrifying, you would love to gouge out your mind's eye... but you can't. It's too late. So, don't say I didn't warn you.


* Teachers don't get three months off anymore. The norm now is June (or most of it) and July. This is not vacation time. It's a mental health break--a time when they can check into a rehab facility. So, if you want to have your carotid artery yanked out of your neck, say to a teacher, "You have three months off every summer. What a lucky duck you are!"


* Schools are not good places to find a mate. At the elementary level, there are few men and even so, as Carson McCullers said, "A good man is hard to find." If you're hunting for a husband/boyfriend, work at one of those big box places giving away bacon...


* Horrible sounds emanate from school buildings. Have you ever heard 25 students--at one time--at their first recorder lesson?  The noises that come from those recorders as the kids torture those instruments... it makes me shudder just thinking about it.


* Teachers are easy. All it takes is the rumor that there's a half-empty box of stale Krispy Kreme doughnuts in the teachers lounge, and a dangerous stampede occurs.


* Teachers--at least elementary school teachers--get excited about crazy things. A nice long pencil (one that still has an eraser) that's been swept up by the custodian and is sitting amidst a pile of dust and paper scraps in the hall. A free pen from an insurance rep. Post-its that are stolen from the school vault.


What kind of sinister things can you share about yourself or your job? Shuddering Sioux wants to know...
Posted by Sioux Roslawski at 3:41 AM 15 comments:

Nina Guilbeau Tells It (Creating Characters) Like It Is

Nina Guilbeau has several novels under her belt (which already makes me envious, since I'm slogging along with a NaNoGoneBaddo from a couple of years ago). She was generous enough to do this guest post for me. When I read her bio on Amazon, I realized she and I have something in common: we both have stories in Chicken Soup for the Soul: The Magic of Mothers and Daughters.


Please read what she has to say about creating characters... and I'm going back to that Chicken Soup collection and check out Nina's memoir story. (I'm hoping a smidgen of her success will rub off on me as I'm working on my manuscript.) To find out more about Nina, go to ninaguilbeau.com 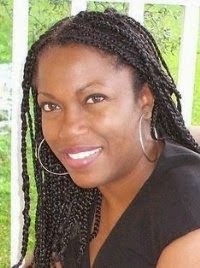 Authors are often asked about the origins of their fictional stories or characters. I personally believe that our imaginative writings are always a little autobiographical in nature. Not in the literal telling of our life’s story, but from our individual perspective of life and the people who have crossed our paths. Ideas for stories and characters can come from our daydreams, night dreams or nightmares. They can come from our present life, old memories or our new visions of “the what ifs” and the “why nots?” Some say there aren’t really any original stories, only original storytellers. However, to be original in any way means we must pull from within to give the outside world something new and personalized.


In my novel God Doesn’t Love Us All the Same, the beginnings of Vera, the old homeless woman, were similar to my grandmother’s. They were both of mixed-race, born around the same time and both of their fathers drowned before they were born. However, the rest of Vera’s story was inspired by my perspective of the strength, determination and sacrifices that develop through motherhood. Was she a successful character? The answer to that questions lies with the individual reader. However, for those who were moved by or related to Vera’s fictional tale (enough to write me), I have to believe she was a successful character for them. So, the answer to the frequently asked question about character inspirations isn’t just about where the inspirations originate, but it’s also about how to use inspirations to define the characters. Here are a few tips to help shape or create new fictional characters:

Write from your feelings – Emotions that have become fused with the character’s personality, such as anger or sadness, need to be authentic. The most successful way to do this is to write from personal, true feelings. That may mean dredging up old memories, but the end result will be felt through the pages. If it’s difficult to relate to what your character is feeling, it’s okay to put your story on the shelf for a while. Just keep coming back to it until it feels right.

Focus on one character trait – Sometimes important characters originate from people you know in real life. Concentrate on the one detail in their personality or behavior that intrigues you. Use only that one behavior and build the rest of your character’s personality around it. That allows your imagination to continuously create new characters and not recycle personalities into different stories because they originate from the same general source.

Develop a back story -Depending on the type of story, one dimensional characters can get old fast. An antagonist meant to be disliked is sometimes devoid of any redeeming qualities. However, that doesn’t mean there aren’t reasons why the character is such an awful person. The reasons don’t have to be relatable or of any consequence to the outcome of the story, but exploring them from a writer’s perspective can help sharpen the overall character development and create interest for the reader.


Pull from your dreams – Keeping a notepad by your bed is cliché, but it’s still not a bad idea. Waking from a dream with a fresh perspective for a story or character can be priceless if you’re able to capture it. Try to note why the character seemed interesting and not just a visual description or list of details. This helps later when the visual image and details begin to fade.

God Doesn't Love Us All the Same  by Nina Guilbeau


Janine Harris never really thought about homeless people. She barely even notices them as she passes them by on her way to work in downtown Washington D.C. All Janine can focus on is the shambles of her own young life, afraid that she will never be able to get past the painful mistakes she has made. However, all of that changes on a snowy evening in December when Janine unexpectedly finds herself alone with Vera, an old, homeless woman who seems to need her help. Now Janie wants to know what could have possibly happened to Vera to leave her so broken and alone.

As Vera shares her life story with Janine, the two women form an unusual bond and begin a journey that changes both of their lives forever. Reluctantly, they each confront their own past and, in the process, discover the true meaning of sacrifice, family and love. Although to truly move forward in their lives, they must fast the most difficult challenge of all – forgiving themselves.


NINA GUILBEAU is the Siblings Editor for BellaOnline The Voice of Women and writes weekly family articles for online magazines. Her e-book, Birth Order and Parenting, is a popular pick with students studying the Alfred Adler birth order theory.

She is a member of the Florida Writer's Association and the author of women's fiction novels Too Many Sisters and Too Many Secrets. A winner of the Royal Palm Literary Award, Nina's work has been published in the short story anthologies From Our Family to Yours and Chicken Soup for the Soul: The Magic of Mothers and Daughters. An excerpt from upcoming novel Being Non-Famous was published in the Orlando Sentinel as a Father's Day tribute.

The End of Freedom

A post by Lisa Ricard Claro brought back a flood of childhood memories. She wrote of the crazy things that kids used to do (and surprisingly more of them weren't maimed or permanently scarred) compared to the overprotected kids of today.

When I was a kid, the world was a different place. In the summer I ran the neighborhood all day. I crossed railroad tracks and explored creeks and rode on buses to a local outdoor mall where I waded in the fountains and imagined what furniture I would buy when I was grown up. I spent all day there when my friend and I went, and we spent no money except at lunch: a soupcon of French onion soup and a fountain coke. I played in my friends' backyard until the fireflies came, making clover necklaces and playing Red Rover.

I also went to the pool--by myself. I got there when they opened and left in time so I could get home for dinner.