1.  She is so good at what she does.
2.  She gets it. Day after day, she understands the writing process.
3.  She says it with such clarity and groundedness...

Of course, I really adore Goldberg's work.  Her book, Writing Down the Bones is like a bible to me. 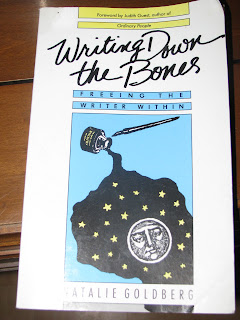 I know this working with my tired, resistant mind is the deepest I'll get on the earth.  Not the joy or ecstasy I feel sometimes or the momentary flashes of enlightenment, but this touching of the nitty gritty of my everyday life and standing in it and continuing to write is what breaks my heart open so deeply to a tenderness and softness toward myself and from that, a glowing compassion for all that is around me.  Not just for the table and Coke in front of me, the paper straw, air conditioner, men crossing the street on this July day in Norfolk, Nebraska, bank digital clock blinking 4:03, my friend writing opposite me, but for the swirling memories and deep longings of our minds and the suffering we work through daily. And it comes from me naturally as I move pen across the page and break down the hard, solid crusts of thought in my own mind and the way I limit myself.

So it is very deep to be a writer. It is the deepest thing I know. And I think, if not this, nothing--it will be my way in the world for the rest of my life. I have to remember this again and again.

If you occasionally stop in and read one of my posts, you might suspect that the word "above" in quotation marks might mean I am not writing about anything religious or deep. I don't go there...The two gifts I received this week are from above me, but both gift-givers are living, breathing mortals...

This was mid-quarter progress report week.  All week I have intended to go through stacks of work that have not been graded, so I can grade them and enter them in on the computer.  All week I have arrived home late in the evening, worn out.  I have nodded off (sitting upright on the couch) and although I did grade the reading and spelling papers that belong to my teammate's homeroom kids, I could not bring myself to helping out myself.

They were due by 3:30 yesterday afternoon.  Around 2:15, I called my principal. (Sometimes it's easier to tuck your tail between your legs via the phone than in person.)

"Can I drop off my progress reports  at your house sometime this weekend?"

My principal, who knows I am definitely not a slacker, told me to not worry; she is allowing me to bring them in on Monday.

﻿
﻿﻿
Earlier in the week, I found out I had missed out on a deadline.  Saturday Writers (in St. Peters, Missouri) had a holiday short story contest. I don't have many holiday tales up my sleeve, but I did have one that has been gathering dust.  I thought I had until the end of the month, but looked again and saw the deadline was November 15.  Oh well, another screw up...

This morning I read the Saturday Writers newsletter and saw that---thank goodness---the deadline had been extended to November 26.  So, back to the revising table so I can send it off next week.

What "gifts" have dropped into your lap recently?   (After all, Thanksgiving is right around the corner.  It's time to give thanks for even the little things...)

Certainly it would be nice to be younger.  Not twenty-something-and-still-stupid young, but being transported back to my thirties might be nice.  The thirties...years when my metabolism was still alive and breathing...
However, being the age I am (I tell my students I'm in my 70's and they believe me; that either indicates how trusting they are, or it indicates what I truly look like), I now am more aware of what is important and what is not.  I'm more comfortable with myself and have accepted what I have morphed into over the years.
I just read Tammy Goodsell's blog on the advantages of old age.  Some will make you chuckle (as you nod uh-huh) and some will make you become introspective. Check out her post from Thursday, November 18.
And how about sharing (with her or me or, preferably, both) what is the #1 advantage to growing older, in your opinion?
Posted by Sioux Roslawski at 2:09 AM 5 comments:

The two teachers plotted together...The older, gray-haired one took the lead, and insisted, days in advance, that they were not going to stay after the musical performance to take down the decorations that had been scotch-taped all over the walls and the base of the stage.  The two of them were going to race out as soon as the performance was over. The grizzled-one's rationale:

The wrinkled and haggard one kept an eye on the program, counting off the songs.  As the two teachers stood behind the risers, giving evil looks to off-task kids when they clowned instead of sang, the old one saw that the younger one did not have her coat with her.

"Where is your coat?" she hissed.  Their plot would fail if one of them had to go searching amongst the audience for a coat.  Almost certainly, a parent or colleague would stop them to talk and then... The two of them would just have to cut their losses and leave the coat behind...

The apprentice in espionage smiled, and nodded to a spot on the floor next to her.  There was her coat. Ready to grab as they escaped.

As the program ended and the two teachers escorted their students off the stage, they hurtled up the aisle, and out the door.  As the gray one shoved open the auditorium door and raced down the hall, she turned to look back.  No sight of the young one. She was torn between leaving her there, stranded, and waiting for her.  But there was no need to worry. A moment later, the perky one emerged, and together they ran to their cars, laughing.

They were the first cars out of the lot.  But they didn't feel guilty, because they are usually the first ones on the lot in the morning. And on many Saturdays and/or Sundays, their cars are the only ones in the teachers' lot...
Posted by Sioux Roslawski at 4:15 AM 6 comments:

I'm much less tolerant with adults.  In fact, my best friend accuses me of judging people on first impressions, and I hold onto those first impressions like a pit bull. It takes me a long time to form a different opinion, and often I do it begrudgingly.  (I guess "accusation" is not the correct term, because she's accurate.)

Check out the Underground Teacher's blog.  Her November 11 post is a compelling one.  It speaks a message to everyone, not just teachers...

South Africa: On Film and Paper

Last night (okay, technically it was early this morning) I watched the movie The Color of Freedom.  The history of South Africa has interested me since I was in high school...

In case you have missed it, the movie is about the real-life relationship that formed between Nelson Mandela and a prison guard.  It stars Joseph Fiennes, Dennis Haysbert and Diane Kruger.  I won't claim it is one of my favorites, but it kept me interested until the end.  (I found it at the library; you can't beat their prices on DVD "rentals.")

However, one of my favorite books IS Too Late the Phalarope by Alan Paton. It is a tale of South Africa and apartheid, focusing on a devastating "tragedy" brought on by a tiny sea shell. Intrigued?  Find the book and read it.

(Paton also wrote the more well-known novel Cry the Beloved Country.  I adore this book too,  but while Phalarope is a story told with a small aperature, this story is told with the shutter wide open.)

My Daughter and Her Family

Last night I spent some time with my grandbaby, while her mom and dad spent an evening sans preschooler.


By 11:00 p.m. I was exhausted (Grammies wear out earlier than four-year olds) after playing a variety of games.  We had a little fashion show with her Polly Pocket dolls (their rubber dresses are sometimes difficult to get on), we painted pictures, we played the "Take" game (one of us would pretend to fall asleep with one of her stuffed animals, and the other would take the animal away and hide it), the "Witch/Frog/Rapunzel/Prince/Mad Scientist game (I would be the witch/mad scientist and turn her from Rapunzel into a frog, and sometimes I was lucky enough to be allowed to turn myself into a prince), along with a book and baking up a frozen pizza and putting on a puppet show.
I thought I was a decent parent, especially with my daughter---I was younger with her, and lost some of my patience when my son was born nine years later---because we had real conversations all the time, I read a great deal to her, and she was well loved.  But I was not as creative or constantly-thoughtful as my daughter is with her daugher.
When we were having our puppet show last night, I noticed that these were not store-bought hand puppets.  My daughter and her child had made them--how frugal and clever and what a great bonding experience.
This little girl is amazingly imaginative, and it is because her parents are creative artists and have made her the center of their universe.  (Which is not to say she does not have limitations and is not disciplined.  She gets put in time-out and is even so self-aware and considerate, she sometimes even puts herself in time-out.)﻿

When our children become adults and have children of their own, it is proof we have done at least some things right; otherwise, they would not be alive.  However, when they become exemplary parents, parents who are thoughtful and gentle and endlessly patient, the pride is unbelievable...
Posted by Sioux Roslawski at 9:07 AM 4 comments: