As far as the new stories, I went to a Listen to Your Mother cast meet-and-greet last night. Each of the writer-performers got up and introduced themselves. Each woman told a little about what their story was about, along with what their first record album was, what their three favorite movies are, what their first concert was, and the most important question: salty or sweet.

There's a rehearsal tomorrow, so if I don't slack next week, perhaps I'll share some great phrases or snippets from the stories. So far, I know that there's a story about someone who had "the meanest mother" and a story about motherhood that began by fostering a child. One of the women could be a stand-up comedian--she's that funny just when she's talking off-the-cuff.

The afternoon St. Louis show is almost sold out, so if you want a ticket for that one, you'd best get it soon. For tickets, go here.


Look at the photo below. That is the cover of your book. You choose the genre. A book on the history of statues? A how-to book from Bob Ross? He turned over in his grave over some recent paintings, and now--risen from the dead--has turned to sculpting. You decide.

Lisa Ricard Claro was the original creator of this writing challenge. However, she's been busy for the last few years. Currently, along with all the books she juggling in their pre-published state, she's also preparing to move--to the beach--which means she and her hubby are going to have to go into the witness protection program, otherwise Linda O'Connell will hunt them down and became a squatter* in their spare bedroom. (By "squatter," I don't mean Linda will squat down because of a too-full bladder, I mean she will move in and won't move out until the police come for her... she loves the beach that much.)

Rufus Leaking loved the beach and wading in the water along the shore. He spent hours exploring the shells and the sand.

One summer, he snuck a hermit crab into the family station wagon. Rufus yearned for a pet, and Herman seemed like the perfect one. The little boy dreamed of the fun he’d have with the tiny creature. They’d watch Spongebob and Finding Nemo together. They’d listen to old Herman’s Hermits records. They’d have crabwalk races in his room.

Somewhere between Sarasota, Florida and Provo, Utah a horrible stench filled the car.

It seemed Herman had scuttled his way to the big beach in the sky.


Later, Rufus invented a tank that would keep a crab alive on a cross-country trip. With his product, there’d be “No more dead Hermans.”  Hopefully Mr. Wonderful will like his business plan… because Rufus and Herman #17 are scheduled to make their pitch. (150 words)


So, I have the same questions for you:

1) What's your three favorite movies?
2) What was the first record/8-track tape/cassette tape/CD you bought?
3) What was your first concert?
4) Salty or sweet?

And just for Val, here's the photo for next week:

Shopping for a formal dress--as mother-of-the-groom--is almost as bad as shopping for a swimsuit. In some ways, it's worse.

Of course, I'm not going to have to take a razor to my nether-regions, nor will I have to worry about chestal coverage when it comes to a gown for my son's wedding. However, no one is snapping pictures when I come out in a swimsuit, and since this evening will be chronicled with loads of photographs, I want to look fabulous presentable unlike a troll.

So far, these are the top contenders: 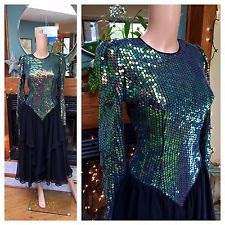 This dress has some definite advantages, the main one being the reaction it will cause in the wedding guests. Because of the sparkly sequins, I'm sure once a person stares at me, they'll start having seizures. If people can only glance quickly in my direction, that means they can't really judge me as hideous-looking... which makes this dress one of my top three choices.

This dress might move up to the #1 position as I continue to contemplate the dancing I will do at the reception. The main feature I love? That longer back part, that makes the dress almost look like the dress is coming apart, like the woman wearing the gown got her heel caught in the hem and it's getting torn off the waistline...
... Because this is something I probably will do. Some clothing malfunction will happen that evening. Hopefully not of Janet Jackson proportions (no one wants to see old lady boobage) but the following things could happen (and have happened in the past):


Of course, I am right-this-minute busily working on bedazzling a pair of Crocs to wear to the wedding and reception. But in case I can't get them finished in time, this will be the perfect dress to wear, because if I wear shoes with even a stumpy heel, I'm going to get them caught in my dress when I dance... 'cause I dance like Elaine Benes. This dress looks like it's already ripped up... 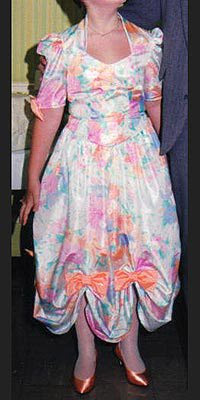 This dress might be the one I ultimately choose, because if I stand still for long periods of time, I think I'll resemble either some drapes, or a tall couch. Or if I sit and don't move too much, I might end up camouflaging myself as a love seat.

Help me choose. Reply with your vote, so I can decide on which one is the gown of my dreams.

Look at the photo below. That is the cover of your book. You choose the genre. A book on the history of statues? A how-to book from Bob Ross? He turned over in his grave over some recent paintings, and now--risen from the dead--has turned to sculpting. You decide.

Lisa Ricard Claro was the original creator of this writing challenge. However, she's been busy for the last few years. Eating lunch with Cathy Hall. Competing with Cathy Hall over the Korean children's book market. Up to her armpits with work from her editing business. Working on her own writing...

She was told plenty of times, “You got powerful mojo goin’ on, girl.” When she was a teenager, Maura could stop somebody in their tracks… with just her unwavering stare.
It was no different with her husband Russell. Maura could usually get him to stop his aggravating antics. Stop belching on command. Stop ogling young women he clearly had no chance with. Stop digging in his ear… and then wiping it on the steering wheel.
But one thing she couldn’t curtail was Russel’s finger fondness. Her husband loved pointing his finger, and it was unstoppable.
Finally, feeling like enough was enough, Maura promised, “If you don’t stop pointing that finger at me, something bad’s gonna happen.”
And then one day Russell waggled his finger under Maura’s nose… and immediately he turned into a statue.


Will Maura undo her mojo? Or will she be happy with her tall, extra-firm man? (149 words)

And if you want to work ahead (unlike Sioux, who's working several days behind), here is the photo for next week: