The World According to Verna

I had the privilege of interviewing Verna Simms on Saturday. Verna is 93; last year, she published her first novel, Water Under the Bridge. Is she content with just one book? Absolutely not. Verna says her next book will be her memoir. 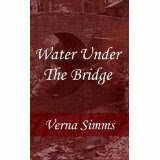 How did the inequality that women faced affect Verna? Watch this short (a minute or so long) video clip to find out...

Is Verna plagued by writer's block? Click on the video below to find out.


Who is Verna's mentor, when it comes to authors? Watch the next video clip...

What came first for Verna, the plot or the characters? Find out when you view the next clip.


I wondered what inspired Verna to write this book. Most women her age would be sitting in a rocking chair and knitting. In the video below, Verna explains what drove her to write her novel.

What does Verna tell her internal critic? Find it out by watching the clip.

What do Amazon customers say about Verna's novel? Here is one review:

Water Under the Bridge, by Verna Simms, has a host of compelling characters. Readers will love some of them, and a few they will hate. The story is set in the 1930s when women had neither a voice nor choice. Main character, feisty preteen, Amelia Hall takes readers on her family's unforgettable journey. The characters come to life on the page. They will stay with me long after closing the book, which I did today. What an adrenaline rush and climactic ending. Rousing applause for this book!

I confess, I went to Verna's house with a resolve to not buy a book. My bookcase is bursting at the seams, I have a stack of books to read, and so on and so on. I left that afternoon with a book in my hand and a few bucks poorer--Verna was that compelling and that gifted of a salesperson.

Be persistent and don't give up. Be productive. And be a book-buyer--purchase Verna's book.

On Friday I made a pilgrimage. Driving for almost three hours (one way) was worth it, because I was treated with a dee-luxe tour of all the infamous sites that make up Val-land.

First, we jump-started our blood circulation by wrestling with riding the Gator.  As you can see from the photo, Val did not trust me enough to let me sit in the driver's seat. (That was very wise of Val. Very wise indeed.) 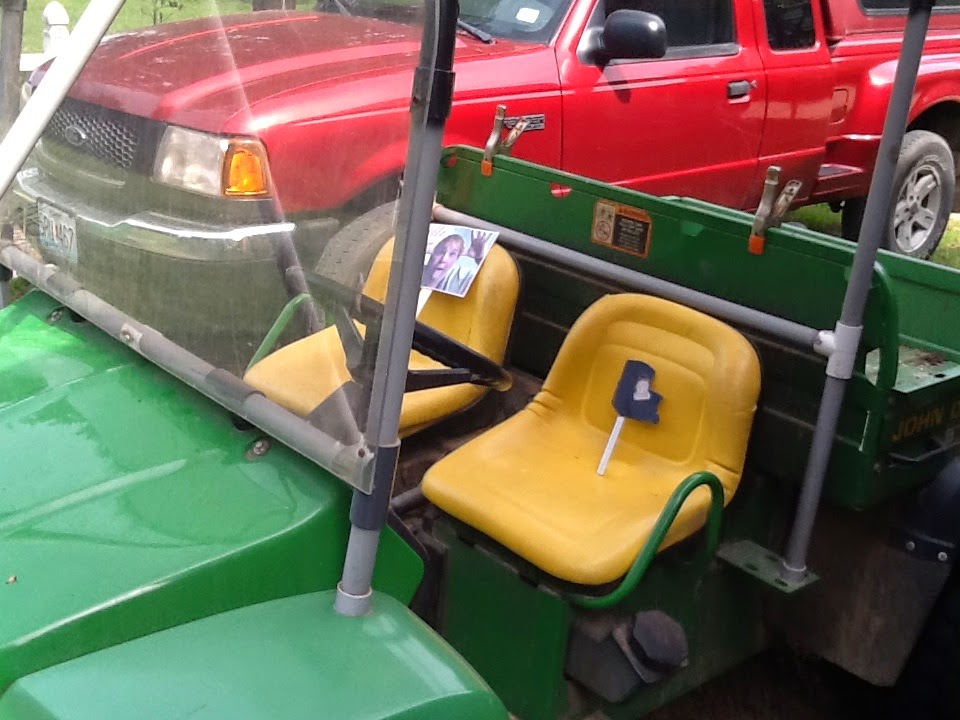 Next, we visited the dead-mouse-smelling post office. Apparently the postal employees had gotten wind that two suspicious characters were on the rampage, because they closed up the post office--early--before we could storm the place.  We got to walk in and take a whiff, but I was unable to interrogate them on what exactly was causing the odor. 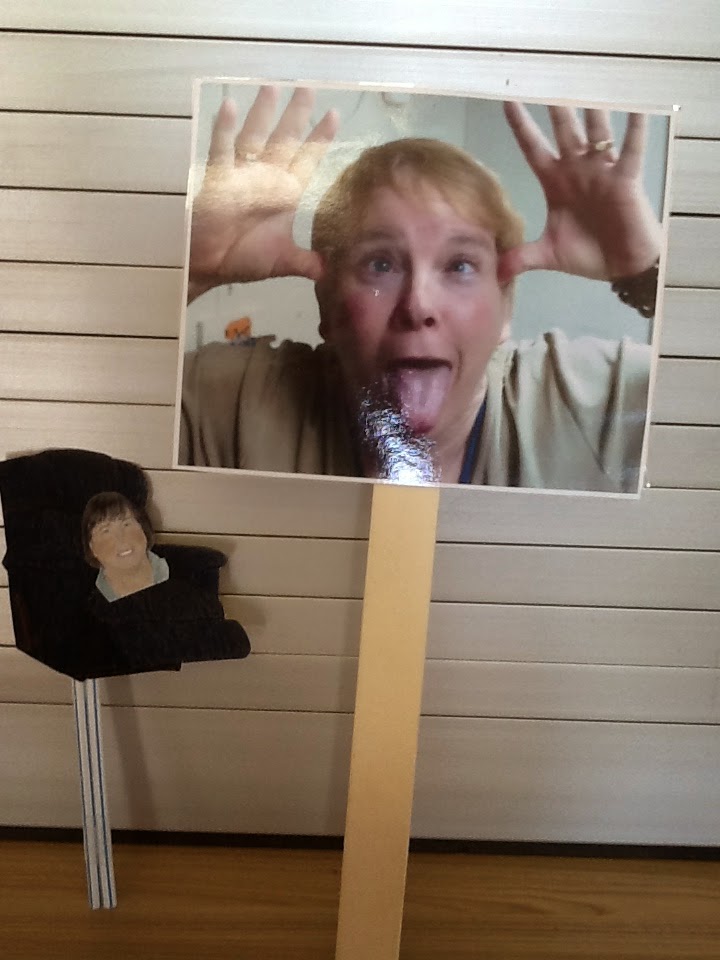 By then, we were parched, so we had a spot of tea and some scones...'cause Sioux and Val are such the tea type...Crisp white linens, some violin music in the background and even some watercress sandwiches--what a lovely treat.

Next, the moment I had waited for for years...the chance to actually see the driveway that belongs to Val's mom. It's frowned upon to stare too long at this sacred ground, and furthermore, it's illegal to park on the driveway (unless, of course, you have filled out an application at least six months in advance), so I had to cloak myself in a grass and gravel camouflage suit and bellycrawl onto the property, just so I could snap this photograph. (The driveway is in the background; in the foreground is Sioux-on-a-Stick and Val-in-a-Recliner.) 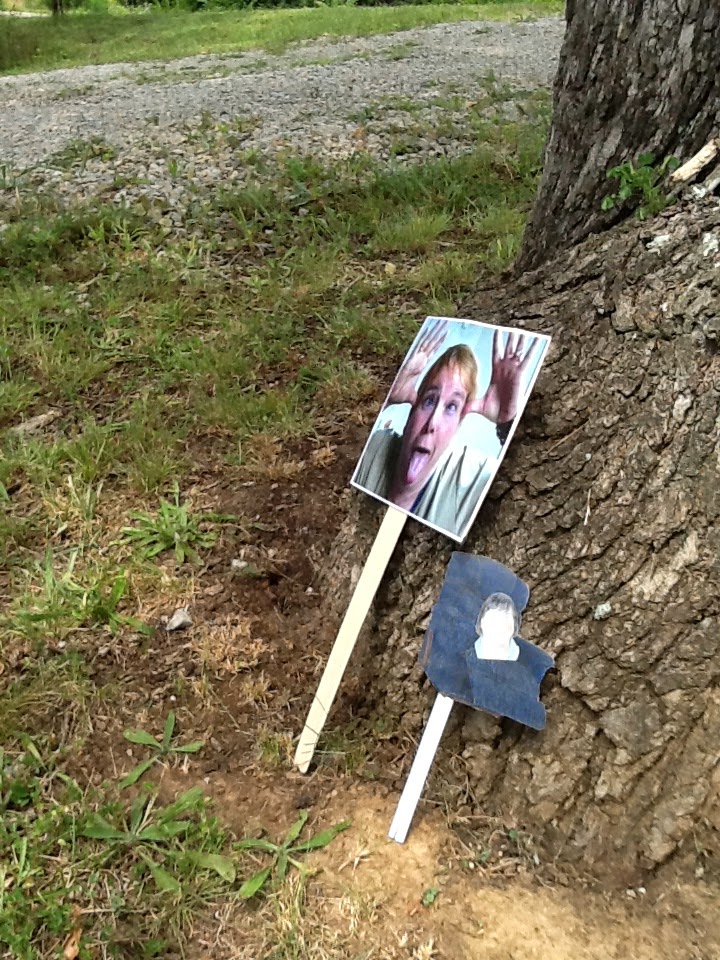 Next, we headed to Val's classroom. Unfortunately, the school district security guard was alerted before we could take more than one picture. However, this is a glimpse into her window; the tangle of computer wires that Val and The Pony successfully untangled are just out of view, on the left. 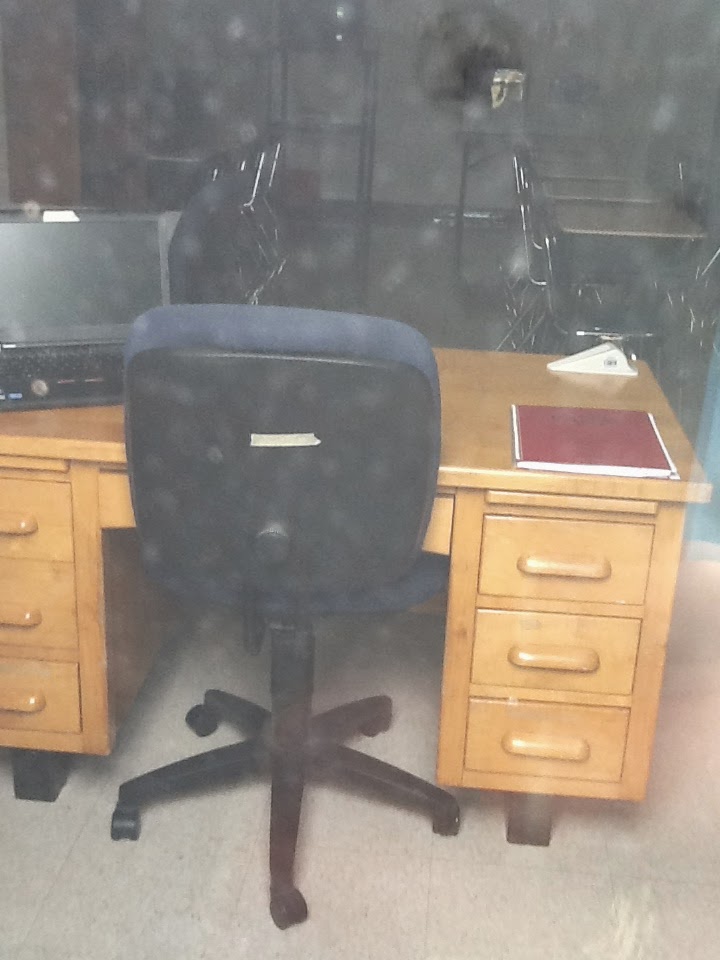 We finished up with more to drink...this time, some elixir from the gods. When the gas station employees got wind that it was one of Val's daily tours ($16.95 for adults and $29.95 for children under 12 because who wants to hang around a bunch of young kids in the summer; a $10 fee for each photo taken with Val-on-a-Recliner is required), they cleared the area so we could take advantage of the photo opp. Most of the time, if two such menacing females would be spied stalking around--suspicious women taking pictures--the police would be alerted. (Actually, we did see a police cruiser at two of the tour sites. I am sure they were not checking out we-who-could-be-terrorists. They were probably there to control the crowds that always create traffic jams when Val makes an appearance in town.) 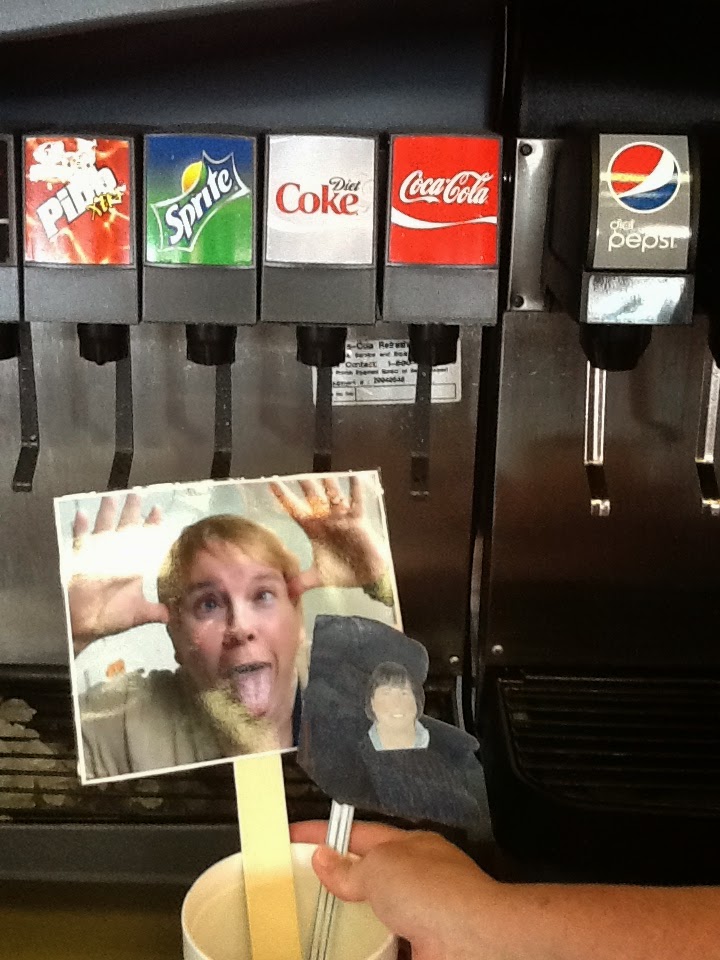 I could not afford the five-figure fee Val charges to take a picture of her basement lair, where all the magic happens. After all, I'm just a poor third grade teacher who has years to go before she sleeps.  But bouyed by the precious elixir that flows from that dispenser (a 17-cent discount on the sodas for Val tour members), I headed back on my three-hour trip home...elated and exhausted.