I was a thief on Friday.
I stole from O Henry...
In my story for Book Blurb Friday, hosted by the dishonest Lisa Ricard Claro ,* I wrote a blurb that mirrored a short story O Henry wrote. ("The Last Leaf" is the title, if my memory is not in its normal swiss cheese form.) In this story, a woman is dying. She says she will last until the last leaf of ivy (growing on the building outside her window) falls off. All of them dry up and blow away except for one. That lone leaf lasts through all of fall and winter as well; the woman's health improves, and ultimately she recovers.
It ends up that a painter friend who lived in her apartment building had painted the leaf onto the wall of the building.

(Lisa called me on my plagarizing. She recognized the way my story mirrored O Henry's right away...)
O Henry, author of the better known "The Gifts of the Magi" and (one of my favorites) "The Ransom of Red Chief," was known for the twists he put into his stories. They rarely ended as the reader expected them to.
Jodi Picoult is also quite adept at slipping the unexpected into her novels. I have just started her book Salem Falls and eagerly await the point where I start to lose my balance, when the earth under me shifts, and I get completely flummoxed.
What are some of your favorite authors who surprise you/give you the unexpected, and in what ways are you surprised?
* As the show "Mythbusters" has uncovered, the belief that Lisa Ricard Claro is a hardworking writer as well as  a parent of grown children has been debunked. She rents her kids (Rent-a-Rugrat) and sadly, her scheme has even spread...
Now Linda O'Connell has gotten on the kid rental bandwagon.  Since she is a teacher, she's too broke to pay the steep leasing fees. With no other option, she has turned to her little doll-of-a-granddaughter, Nicole.
(You don't believe me? Check out Linda's blog. Notice how many pictures there are of Nicole lately. Zero in on her tiny wrists...Clearly, there are marks, where the duct tape was attached, tethering this tot to Linda's computer. Focus on how large Nicole's eyes are...They are huge because only for these photos is Nicole allowed out in the light of day. The rest of the time she is hunched over a keyboard, as Linda dictates her stories.)
﻿
Posted by Sioux Roslawski at 6:03 AM 7 comments:

It's Book Blurb Friday. Every week there is a great photo to get your imaginative juices flowing. Your challenge: write a blurb for a book to match the picture on the front cover, and keep it at 150 words or less...Go to Lisa Ricard Claro's blog to get a much better explanation than I have here... 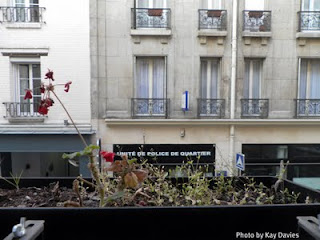 Virginie was dying. Having given up on life, not even Nutella slathered on a croissant could tempt her. All she did was lie in bed all day and look out the window.

With her friends and family huddled around her, she pointed her finger towards the window and proclaimed, “I will only last as long as the geranium. When the last petal is gone, I will be gone as well.”


But the last few petals clung on all summer, into the fall and winter, and were still there the next spring. By that time, Virginie had regained the will to live, and no longer even gave the red flower a second thought.


Was the geranium magical? Or was some prank responsible for the ever-lasting petals refusing to budge? (The answer will surprise and move you.)

"I'm going to sue you!  This sounds suspiciously like a story I wrote."  --O Henry

"Did you know you can make a papier mache humidor out of those fallen geranium petals? Watch my show on Thursday to find out how..."  --Martha Stewart


135 words not including the "reviews"

What would a dog do?

If we lived our lives like a dog lives their life, the world would be a better place. We'd be happy with the same food every day. We'd wag our tail a lot. We'd be happy even if our walk was occasionally cut short and wouldn't whine about it.  We'd sniff each other's butts and...Okay, perhaps that is one canine habit we don't have to adopt.


On Sunday we had a family get-together at my mother-in-law's; since she lives just a couple of blocks from us, at some point, my husband got Foley and brought him down.

My granddaughter, who's five, loved the idea of being in charge of someone/something else. After all, she's told all day what to do and how to do it and when to do it. So she was enthralled with being able to walk Foley around on his leash.

Unfortunately, Foley was not thrilled. He was in a fenced-in yard. 'What's with the leash?' he wondered. He wanted to play ball. Being led around by a little kid was stupid, from his perspective.

But he tolerated it. And made the best of the situation. As Riley walked him around, he got to smell a few good smells. There were breaks where she'd drop the leash and he'd get to chase the ball for a while.

As writers, as teachers, as humans doing their best to keep their head above the water--here's my lame analogy, Hope--we try to make a bad situation work for us. If we get a piece rejected, we revise it so we can submit it to a different publication. If we face writer's block head on, we put the piece away for a while and let it marinade. If we get a story shot down, we tweak it, we revamp it, and send it out again.

Be like Foley. Turn a negative situation inside out...Put a positive spin on it. And don't stop trying...
Posted by Sioux Roslawski at 6:37 AM 8 comments:

I am quite proud of my smidgen of productivity. Today I submitted two pieces. The story I sent off to Thin Threads (thank you, Lisa Ricard Claro *) was actually 5 1/2 hours early. (It had a deadline of today; I figured "today" extended to midnight, and since I sent if off at 6:30 tonight, I was working way ahead of schedule...for me.)

This was a piece I really wrestled with. It had too many words, so once I finished getting it down, I had to carve and whittle away at it. And the way the parts fit together clumsily...this piece was a PITA! ** I sent it to a friend who gave me great suggestions. In the end, I was satisfied with it (for now).

I also sent a story off to Chicken Soup for the Soul. To be completely honest, this was a story I've had on the backburner for a while. It only needed some minor tweaking. But still, I'm counting it as a second submission in one day.

And I felt like a busy bee until I read that today, Linda O'Connell wrote and sent off 28 submissions. *** IN ONE DAY! How in the world does she do it?

But if you check out her blog, you realize that she has so many places where she has been published, she has a 2nd and 3rd blog just so they all can be listed.  Amazing!

I have another Chicken Soup piece in mind that I'm going to start tonight. And if I'm going to catch up with Linda, I guess I'd better write fast...


* If you haven't used it yet, click on the "Writers--Paying Markets" button at the top right of Lisa's blog. She got me on the trail of Becky Haigler and Silver Boomer Books (I have a story in their patriotic anthology coming out this summer!).  I guess when I make some big money, I'll have to give Lisa a cut...

** You don't know what PITA means?  Not that lovely soft bread-like stuff that can be filled and eaten like a sandwich. In this instance, PITA stands for "pain in the ___."

*** Okay, this was a slight exaggeration, but not by much. There was a day recently where Linda wrote and submitted seven essays! IN ONE DAY! Geez! I'm starting to get suspicious...

(All of a sudden, Linda's litte granddaughter Nicole has popped up with great frequency. I wonder...Has Linda trained that little doll to tap away on the computer?  Has Linda set up her own version of a sweatshop as she keeps Nicole chained to the computer keyboard?  That way, Linda could be working on another story while she dictates a story to Nicole...I think I need to call the authorities...Oops, I can't take time out for that---I need to work on another submission...)