What Do You Count On? 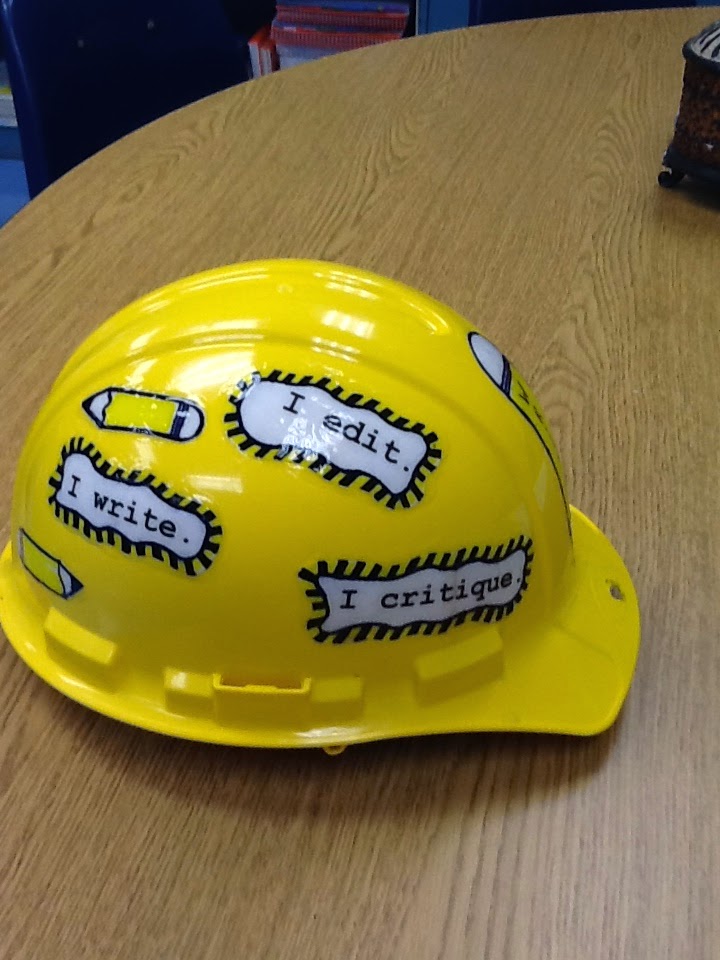 Writing is hard work. Being able to count on certain tools is critical. 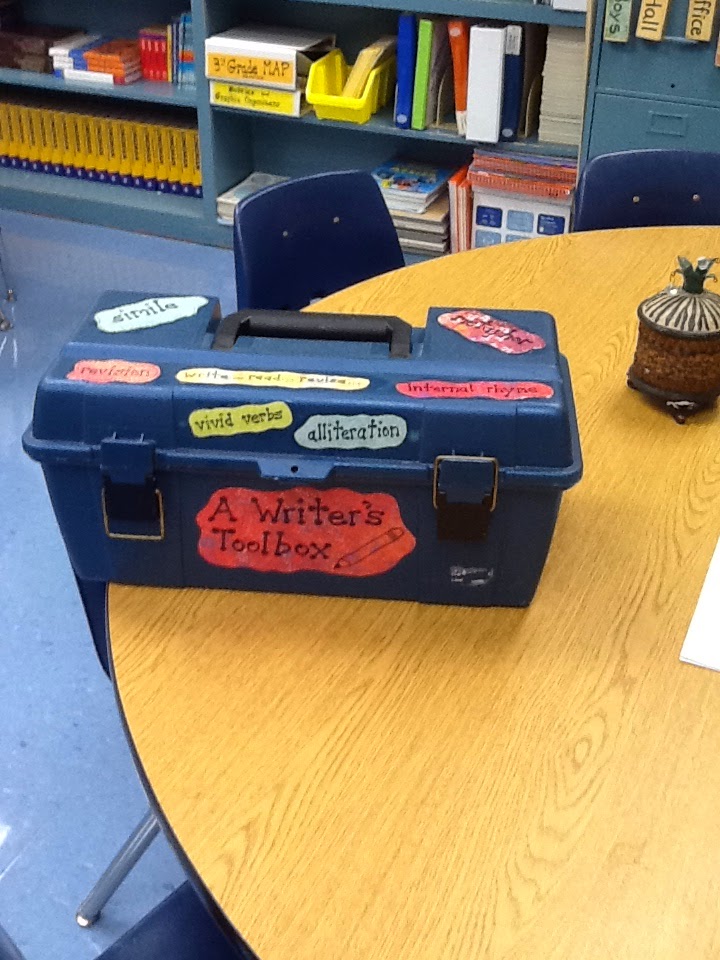 On a daily basis, we have to dip into our tool box as we craft our lines. 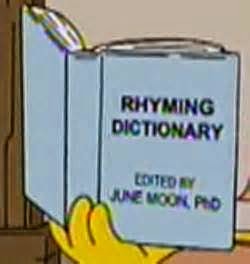 One of the tools I occasionally use is a rhyming dictionary. (Mine has a boring cover, so I'm borrowing Bart Simpson's for a moment.)
Rarely do I write poetry with a rhyme scheme. I mean, do you think I even want to dabble in the same arena as Fireblossom or Mama Zen? Fuhgeddabodit.
However, sometimes I am forced drawn into writing a poem with a particular rhyme scheme. Sometimes I'm a scribe as my class writes a group poem. Very occasionally, I write a rap (and horrors! Yes, I even perform it. What's that you say? You haven't heard of Reddiculous Redd? You're missing out on something hilarious rich.)
A rhyming dictionary is a tool that is always sitting on my shelf, waiting and ready... 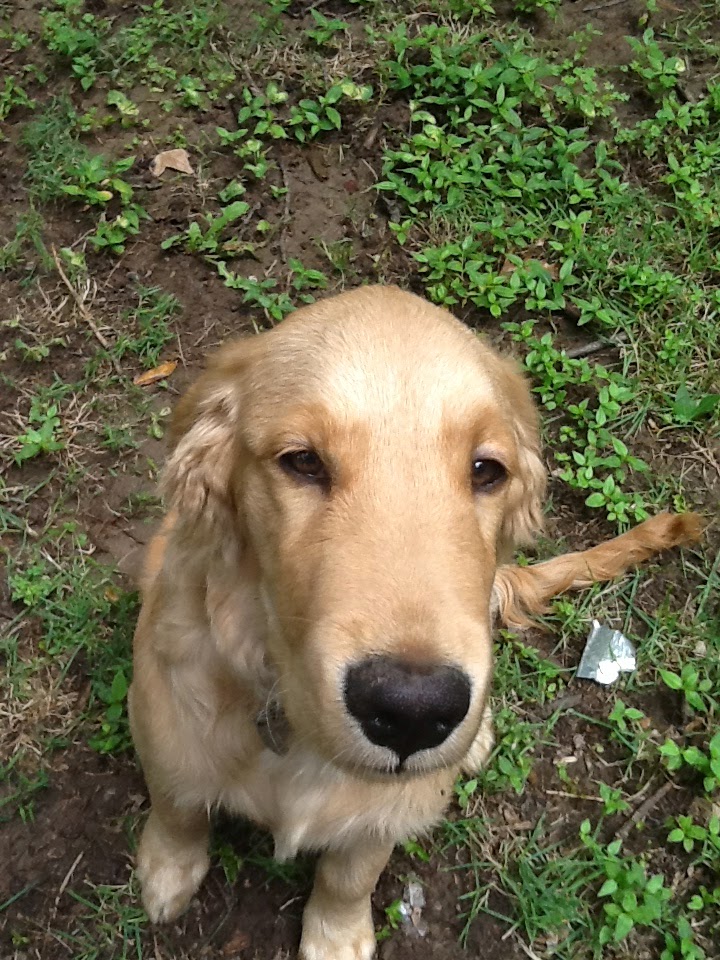 Here is a tool that ensures I don't sit too long. Radar. Whiner Extraordinaire. The Yipster. The Gnaw-er. We thought we were adopting a dog, but we were hoodwinked. Radar is a miniature pony. He's all legs right now, and weighs close to 40 pounds. And he's only five months old. 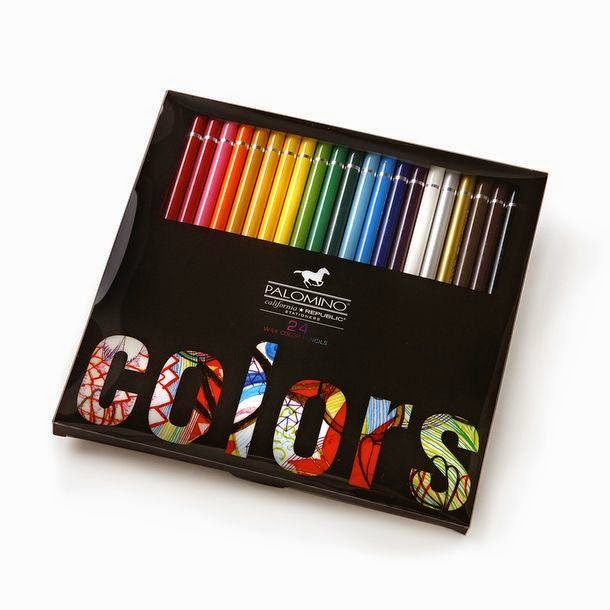 Okay, admittedly, this is not a writing tool--at least not in the strictest sense. Aquarelle pencils are really tools of diversion. Using a brush and water (or a finger you slobber on), your drawings are transformed into looking like watercolor art. This year, I've vowed to filling my writing journal with doodling and ticket stubs and photos along with the writing.
However, as I'm sketching or zentangling (type "zentangle" into your search box, but beware: doodling with zentangle patterns is highly addictive and is a wonderful way to while away the hours during day-long meetings) I'm also thinking about what I'm writing.

The delete key is another tool I rely on. Getting a story down often means there are pages/paragraphs/lines/words that need to be deleted as revision happens.

'Cause if you're a writer, you know that writing is usually more deconstruction than construction. 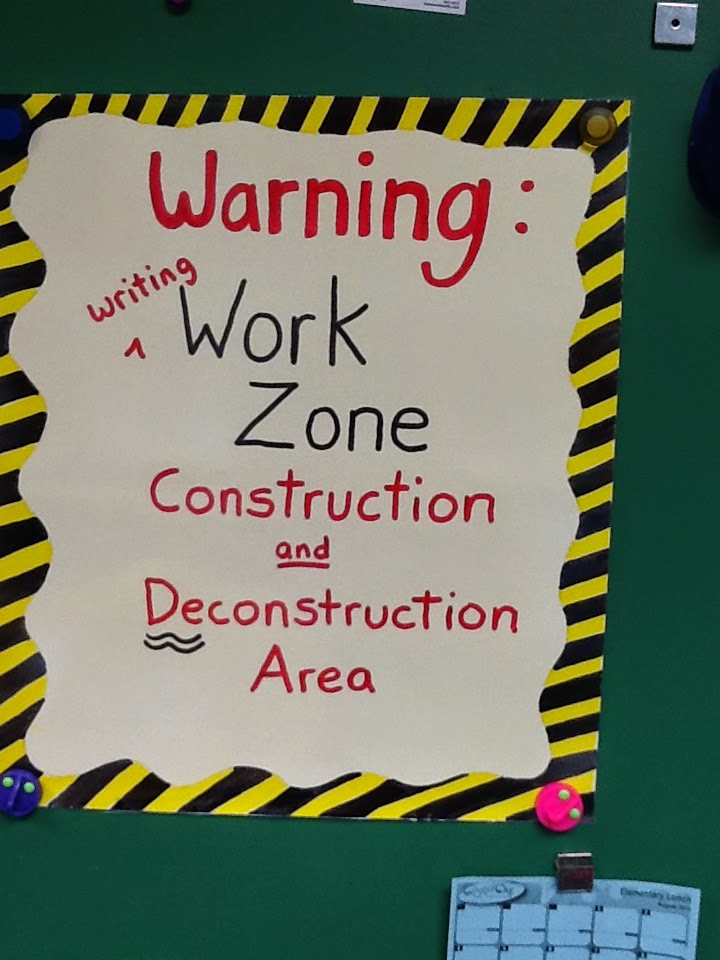 What writing tools (or tools of diversion) do you rely on?
Posted by Sioux Roslawski at 3:08 AM 12 comments:

Stranger in a Strange Land

(No, that is not me in the above photo, air-brushed within an inch of my life, resulting in this gorgeousness. It's Paige Adams Strickland...memoir-writer and a sister from another two mothers...)

If you aren't an adoptee, you don't know what it's like to be a stranger in a strange land. I knew--from toddlerhood on--that I was adopted, and I was loved and doted on. But I also knew I shared nothing genetic with my family, and when I passed by people in the street, I'd wonder... 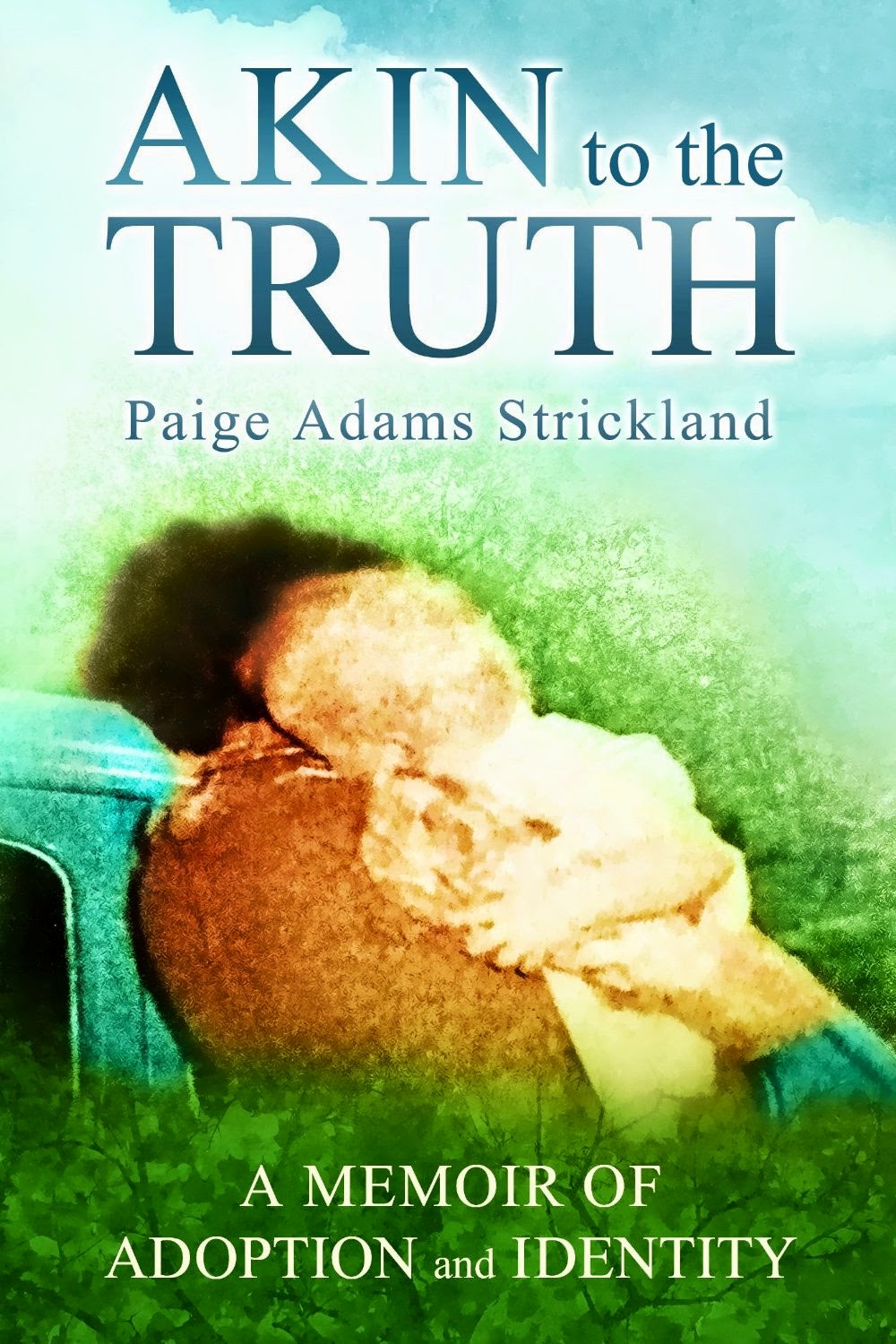 Reading Paige Adams Strickland's Akin to the Truth brought back (to me) the black hole full of the unknown.
Strickland's journey is like a stream of consciousness. One memory bumps into another and into another. She bravely bares the dysfunction of her family, she shares her lovely grandmothers with the world, and admitted--through her actions--that she was always striving to make her parents proud.
The tiny tidbits tossed to the reader, of life growing up in the 60's and 70's, will bring the reader back in time. The television shows. The songs. The clothes. The sayings. (My father said, "Hell's bells" as well, just like Paige's. And my dad has his "cocktail hour" every evening, too.)
Like every good writer, Paige Adams Strickland makes us wait until her story is almost finished...before we find out what we are desperate to find out. Does she find her biological parents? Does she discontinue the search, because rooting around in the unknown sometimes gets messy? Does she get rejected by her birth mother or her birth father?
You'll have to read the book to find out...
At the very end, in the last two paragraphs, Strickland gives us something extra-satisfying. In those final lines that flow like poetry, she's found her rhythm as a writer and as a daughter and a woman.
And at the very end, it's also apparent: Paige Adams Strickland has another story to tell...a story that picks up where she's left off in Akin to the Truth.

Via a drawing, an electronic version of Akin to the Truth will be given away on August 28. Leave a comment...and keep your fingers crossed.


A description of the book:  In 1961, adoption was still one of those private and taboo topics. Not much identifying information was provided for adoptive families or for birth parents by the agencies. In Ohio, records were sealed forever. Adoptees and birth mothers were supposed to be thankful for the adoptive family and never look back. Adoptive parents thought their deal was signed and sealed.

As a child and teenager, growing up adopted was like a Scarlet Letter "A" if anyone ever found out the truth. At least, that's the way author, Paige Strickland felt as she muddled through social situations and other interpersonal relations. She always loved her adoptive family, but realized she wanted not just more, but what other "regular born" people had: real roots, accurate health history and authentic family lore. She wanted freedom from shame, more dignity, authenticity and a full identity.

Then, through random chance, a local TV talk show in 1987 revealed that certain records were open if you were born before 1964 in the state of Ohio, and the author's life would never be the same after that program.

During her quest, (pre computer), for her identity, her adoptive father struggled with his own self image and sense of belonging, so both father and daughter embarked on separate and unique parallel missions to find what was missing in their lives.

This is the story of how being adopted affected Paige growing up in the 1960s, 70s and early 80s. It shows how one adoptee has embraced and learned to view family more globally. She tells the saga of a loving but dysfunctional family of both blood and choice, trying to cope with typical and not so typical life alterations during the decades of social revolution and free love. She learns that the most fascinating family stories are discovered by those passionate enough to question and search.

Paige Adams Strickland is a teacher and writer from Cincinnati, Ohio. She is married with two daughters.

About the Author: Paige Adams Strickland, a teacher and writer from Cincinnati, Ohio, is married with two daughters. Her first book, Akin to the Truth: A Memoir of Adoption and Identity, is about growing up in the 1960s-80s (Baby-Scoop Era) and searching for her first identity. It is also the story of her adoptive family and in particular her father’s struggles to figure out his place in the world while Paige strives to find hers. After hours she enjoys family and friends, pets, reading, Zumba ™ Fitness, gardening and baseball.
Posted by Sioux Roslawski at 3:21 AM 22 comments: