All About Ravens and Back-of-the-Book Blurb # 69


While at the Grand Canyon last week, I learned some things about ravens that made me admire the birds even more than I previously did.

These fascinating birds--about the size of red-tailed hawk--fly upside down and do somersaults in the sky, just for fun. They drop sticks and then swoop down to get them before they hit the ground, in their solo game of fetch. They live to be 25-30 years old, and can make 100 different vocalizations--everything from a wolf to a toilet flushing.

Generations of ravens later, the birds still responded correctly. The younger birds--birds that had never seen people in the masks--stayed away from the masked people who were deemed as dangerous. They flocked to the kind ones and the fun ones, even though they had never encountered the people in the original study.

And now onto the business of book blurb.

Lisa Ricard Claro was the original creator of this writing challenge. She moved to Florida and is now enjoying some much-deserved beach time--on a weekly basis, probably. (If you check out her blog and read this week's post, you can even see what she sees when she looks out the window of her writing room. Be prepared to drool. It's a lovely view.) 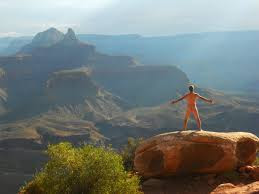 The Man With No Plan

Edwin went to the Grand Canyon for the first time. He was a pantser. In his everyday life he flew by the seat of his pants, so the trip was no different. He went into the park with only the clothes he wore, a half-filled tube of sunscreen and a gallon of water.
Unaware that the terrain was quite rough in spots, he snagged up this pants, shirt and boxers until they were shredded. Having no other choice, he took them off, and then admired the view below him.
Then Edwin realized that somewhere during his hike, he’d lost his car keys.
Will he have enough water to avoid dehydration? Will he have enough sunscreen to avoid his man-bits turning into crispy critters? Will he make it out alive, or will he have to find a herd of elk to live with? (147 words)

And for Val and Pat and anyone else who'd like to play along, here is the photo for next week: 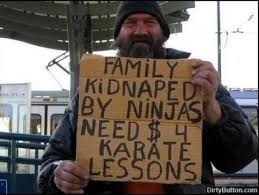 How about you? What animal do you admire, and why?

Four days ago I was in Sedona. I'd been told the rocky hills were incredible to look at, and indeed they were. We stopped at place after place, on the shoulder of the road and at parks along the way into the city, and marveled at the naturally-made rock sculptures. 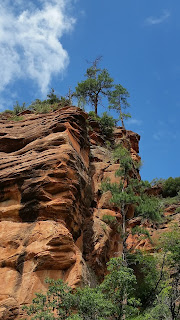 Three days ago I spent the whole day in the Grand Canyon. From sunrise to sunset, I was there with family to soak up the peace and the breathtaking beauty.

I apologize for not posting on Friday. I don't know what happened. We were staying at an Airbnb, and the connectivity was spotty. However, there was a night when the wifi was working fine, I created a post and scheduled it. Something screwy happened, because the post disappeared. (This Friday I'll use the same photo from the lost post.)

During our three days in Williams, Arizona I:


Going to the Grand Canyon was on my "bucket list." What is on yours?