Every year, since I read Donna chronicling her "wins and losses" when it comes to publishing, I've bought a cheap planner and kept track of my submissions. The first year or two, I even did the same--in January, for each submission, I noted whether it had been rejected, accepted, or whether the jury was still out.

Now, I just use the planner to not always note when I've submitted something, so I don't look l like an idiot and resubmit it to the same publisher.

This year I decided to go with a humorous planner. 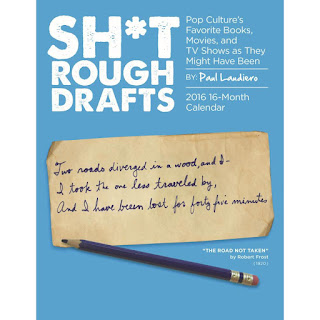 Every week, there is a humorous version of a movie script, a book, a play or a TV show--a version that cries out for revision.

Here is one example:

Second Witch:  Fillet a fenny snake
In the cauldron boil and bake
Eye of newt and a touch
of cinnamon
A pinch of sugar, now stir
it quick again.


It reminds me of my Tuesday night writing group--the one that meets in a bar/restaurant. I had brought a piece about various critique groups I have belonged to over the years, and in it I noted that because of the WWWPs (my current "main" writing group) I had gotten some things published in anthologies and was 79,000 into a manuscript.

One of the women looked with admiration at me. "That many words! That's really good." Then she saw the dubious expression on my face and said, "Isn't it?"

Because it's better to proclaim something publicly so my friends can call me out and embarrass me when I fall flat on my face encourage me, I am going to set a goal:  by the end of February 2016 I will have finished this version of my manuscript. I think hope it's a doable goal. After that, I hope to have some time to look at it as a whole piece, and see what still needs to be done to it.

I also hope it's not an even bigger pile of poop by then...

Do you have a pile of poop that you're hiding away? Tell us about it. This ain't no scratch and sniff blog, so you have nothing to fear...

And here's my attempt at a poem that's 60 words (or less) for Mama Zen's challenge. (It's 53 words long, not including the title.) 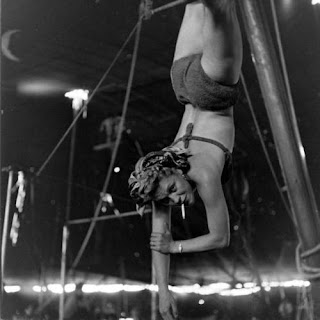 Shaddup and don't even bother.
I know already.
These cancer sticks'll kill me.

But hey!
Dangling above these
popcorn-eating chumps
hangin' by just some cheap rope...
well, that ain't safe,
neither.

But hey!
Don't my rear end
look good
upside-down like this?

Or didn't you think
I knew
that you
noticed?

Well, Thanksgiving is over. The turkey was not stuffed, but I was. The holiday is over... done... fini and even though I was fortunate to have five days off in a row, that string of leisure time is over... tomorrow, it's back to work.

I thought I would try to think of some of the things that I'm thankful for--the type of things that don't usually get mentioned...

This ginger-flavored soda (similar to root beer, but quite distinctively different) comes in a 12.7 oz. bottles. If they came in 2-liter versions, I'd be swigging on it all day long. (And if it DOES come in jumbo-sized bottles, please do NOT tell me.)


* Erica Jong has a brand-new book out.

Her Fear of Flying came out many decades ago. I've only read 50 or so pages of Fear of Dying, so it's too early to proclaim my love or indifference. However, so far I'm enjoying it.

* I haven't managed to screw up my flash drive yet. 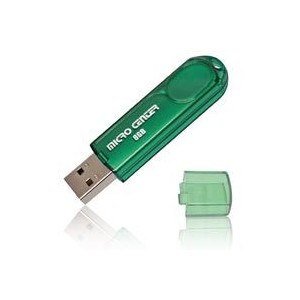 This looks just like the one that has my WIP on it (just shy of 80,000 words so far) except the cap of mine has a part of it broken off. There have been some moments of panic. Like the time I thought it had gone through the washing machine. The time that I thought it was lost--really lost. The other (several) times I thought it was lost. I'm very careful to make sure it's safe to eject before I yank it out (I learned that the hard way a long time ago) and I know I'm a dinosaur for even using a flash drive these days. (Yeah, I know I should put it on the horizon or the cloud or the atmosphere or whatever it's called. But hey! You! Get offa my cloud.) But that's what I am--a lumbering, almost-extinct creature with arms that are often too short and ineffectual.

Probably soon (after another near-catastrophe) I'll make it into a google doc so it's always safe... no matter what kind of crazy mess I create. But not today.

That's all I got right now. Three is pathetic--barely even warrants the title "list"--but that's it for now. Which means you can add to the list. Leave a comment. Tell me what you're thankful for--other than the traditional Norman Rockwell answers, that is...