Yikes! There's a Hamster in the Dashboard!

For all three of my followers--I'm back onto this continent. On Thursday I will post some photos from France, but for today, check out a collection of pet stories, and at the end, find out about a give-away I'm offering... 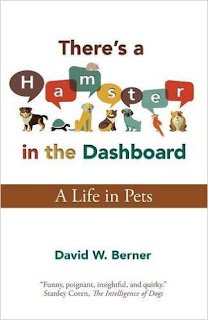 Right away--from the title on--I felt at home with the stories in David W. Berner's book There's a Hamster in the Dashboard:  A Life in Pets. The title made me hurtle back to my childhood to a gerbil that disappeared in my closet... and was never found. (I like to think it had a long, interesting life, full of adventures, since my closet was full of all sorts of stuff.) And then I remembered the hamsters my daughter brought home from a high school science class. We treated those hamsters like they were CEOs. We purchased one of those expensive hamster homes--with the plastic tubes that looped around outside of the cage--but these ungrateful hamsters were Houdini-reincarnations. They chewed their way out, came upstairs from the basement, and were literally scared to death when faced with our golden retriever mix. (The final stand-off was in the middle of our living room, but our cats had flushed them out. The hamsters had camped out behind a floor-to-ceiling bookcase and our two cats sat--fascinated--in front of the bookcase for quite a while before the rodents tried to make a break for it.)

Berner's little slices of his life are filled with humor and poignancy. His story about ants reminded me that I too had had an Uncle Milton ant farm. (Unfortunately for the ants, I lost the water dropper, and had to use a straw. If I remember right, I ended up accidentally drowning the ants.)  At camp, I had a pet ant (one of those great big ones) that I kept in my plastic soap dish for a while. In his book, the author chronicles the varied pets he's had, including a lizard, a cat, more than one dog, a spider named Ralph, and two gerbils that got "married." Tony and Tina the gerbils had babies so soon after their honeymoon, I wondered... Were they Tony's babies? Should he have gone onto the Maury Povich show and demanded a DNA test? I just don't know...

David Berner even tells of his desire to have a piranha, his father's dream of having a monkey, and having a squirrel for a few days. It's obvious that Berner gets it. He gets the connection we have with animals. He gets the importance that animals have in our lives. And he gets how much pets enrich our lives.

There are times when I read a collection of vignettes and the endings aren't satisfying. It's as if the writer has spent the time on lacing up the story, nice and neat, but then finally ties a quick, sloppy knot at the end. Berner took the time to give a satisfying finale to each story.

Leave a comment, and I will put your name in the hat for a free copy of the book. (Sioux don't do no "raffle-copter" 'cause she ain't that tech-savvy. Instead, your name will literally be put into a hat, shaken AND stirred before I close my eyes and one slip is pulled out.)

A book of essays by award-winning author and journalist David W. Berner is the next best thing to storytelling around a bonfire. In There’s a Hamster in the Dashboard, Berner shares stories of “a life in pets”—from a collie that herds Berner home when the author goes “streaking” through the neighborhood as a two-year-old, to a father crying in front of his son for the only time in his life while burying the family dog on the Fourth of July. And from the ant farm that seems like a great learning experience (until the ants learn how to escape), to the hamster that sets out on its own road trip (but only gets as far as the dashboard). Along the way, Berner shows that pets not only connect us with the animal world, but also with each other and with ourselves. The result is a collection of essays that is insightful and humorous, entertaining and touching.
Buy links:
Print or Ebook: Amazon
Print copy only: Dream of Things
Paperback: 138 Pages
Genre: Memoir, Pets, EssaysPublisher: Dream of Things (April 23, 2015)ISBN-10: 0990840719

About the Author: David W. Berner is a journalist, broadcaster, teacher, and author of two award-winning books: Accidental Lessons, which earned the Royal Dragonfly Grand Prize for Literature, and Any Road Will Take You There, which was a Grand Prize Finalist for the 2015 Hoffer Award for Books. Berner’s stories have been published in a number of literary magazines and journals, and his broadcast reporting and audio documentaries have aired on the CBS Radio Network and dozens of public radio stations across America. He teaches at Columbia College Chicago.