The Agony of Not-Terrible Defeat

Last night I went to a work trivia night. I was the anchor of the table. In this case, I was the member that would be holding back the rest of the group. I suck at trivia.

We had predict what score we'd make, in case there was a tie for first  some miracle happened  unicorns pranced around our table, pigs started flying and God parted the Red Sea (again) and gave us the answers for each round.

I (with hopefulness) suggested 4.

Who was the lead singer of Pearl Jam? I knew the answer, but not last night.

Who was the lead singer of Poison? I knew it was Bret something (I'd watched Celebrity Apprentice years ago when he was a contestant) but I couldn't come up with his last name last night.

Who wrote Of Mice and Men... Who wrote Catcher in the Rye... What

was the name of the movie about the two Olympic figure skaters (we only saw a photo of the two actors D.B. Sweeney and Moira Kelly)... I knew those answers. How exciting that I could help out occasionally.

Somehow, we ended up 6th or 7th, out of 25, which is not terribly shabby. Of course, the night was full of laughter, food, and teasing...

Email ThisBlogThis!Share to TwitterShare to FacebookShare to Pinterest
data, data teams, data walls, teaching, classroom losing isn't too bad when spinach balls are involved... losing is okay if it's all for a good cause... losing isn't terrible as long as you aren't the biggest loser

What a Difference a Day (or Two) Makes

Earlier this week: exhaustion. Pressure. Regret. (I was finishing my report cards a little past my principal's deadline, and had two nights were sleep was just an appetizer.)

Today: joy. Hope. Energy. (I plan on doing a better job of keeping up with my paperwork... but you know the saying about "man makes plans..." )

I can hear the gods laugh as I type this.

She was a vibrant person, so full of life... except around report card time. Being buried under work that she should have kept up with, she breathed her last breath, and uttered her last words:

I'll try to do better next time.

And the gods answered, "We'll see. You say that every quarter."

Yesterday I was in a small theater all day. Yes, it was a gorgeous day, weather-wise, so I missed most of that. The black chairs, the black stage, the small spotlights--they were in stark contrast to the bright sunshine and the warm breeze that was happening right outside the double doors. However, I got to witness a different kind of beauty.

All day (and the day before, as well) writers were auditioning for the Listen to Your Mother show. We heard nostalgic pieces about mothers. We heard pieces of fierce motherhood--stories about mothers who had to be warriors for their children for a variety of reasons. We even heard a story about recovering from years of harsh treatment from a mother. 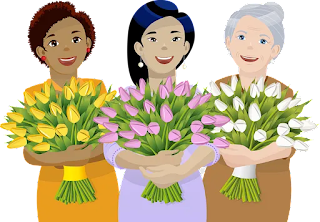 The stories were healing. It was obvious that for the writer--writing the story, along with telling the story to an audience, was therapeutic. It either brought the mother back to life--if only for a moment--or it was a balm that helped alleviate a past pain.

If you're in the St. Louis area and you're free on May 7 (the day before Mother's Day), I suggest you save the date. The show will be at the Grandel Theater, and I think it will be wonderful.

Posted by Sioux Roslawski at 3:30 AM 4 comments:

Two blocks from our house is a park. It's big enough to have a football field (along with another space where a second team can practice). There's some playground equipment, a large pavilion, and lots of great smells. 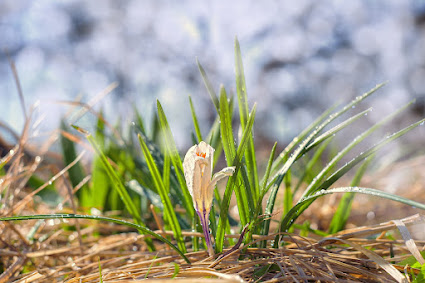 image by Pixabay--There was dew on the grass this morning... and it's the
first day of spring!

At least that is what Radar is interested in. Some smells are so complex, so fascinating, he would stand for 10 or 15 minutes and sniff (if I allowed him to linger that long). I don't, because sometimes his smelling results in his finding something to eat. Could it be some discarded chicken bones he's crunching on?

Accck! Gutteral. Loud. As much phlegm as I can muster, I try to verbally persuade him to stop crunching on whatever he's eating as I yank him back from the dead squirrel  half of a left-over stale sandwich daily delicacy.

This morning, it was early enough that Radar's friends were not in their back yard. Usually, as soon as they catch Radar's scent (from several blocks away) they're in their back yard (which butts up against the park). They're ready. Hog Dog (a yellowish dog built more like a hog than a dog) works up a froth as he runs back and forth along the fence line, barking. Snow Dog (an Alaskan Husky) usually lies in wait, and as soon as we get close to his fence, he streaks across his yard and barks.

Too early on a Sunday morning for either of Radar's friends. Bad news for him, good news for my arm (because I have to pull and pull and pull Radar into the middle of the football field and away from the yards... otherwise, he's leaping and twisting like a bucking bronco in a rodeo).

The sound of rain outside... while you're warm and dry inside. Feeling tired... and being able to curl up on the couch and take a nap. Being hungry... and fixing some eggs and potatoes, topped with a drizzle of raspberry salsa. 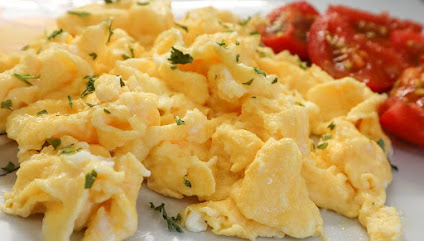 It's the little things that fill up my morning today...

Email ThisBlogThis!Share to TwitterShare to FacebookShare to Pinterest
data, data teams, data walls, teaching, classroom not my eggs--my eggs are in the witness protection program and can't get their picture taken... what came first--the egg or the salsa?
Older Posts Home
Subscribe to: Posts (Atom)