What Would Be YOUR Mash-Up?

Tonight there was book-selling (by everyone). There was stalking (by me). And there was salivating (by me, again).

Here are some of the writers who were there:


A large group of local authors (65, I think) gathered together tonight in O'Fallon, Missouri. I sat a few feet across from an author named Shannon Yarbrough. His book cover intrigued me. 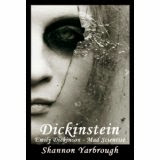 Yarbrough's novel is a mash-up. Emily Dickinson meets Frankenstein. Okay, they don't literally meet each other... but you get the idea.

Here is one Amazon review of Dickinstein:

There's something about a book that doesn't live up to your expectations - especially when that book and its author have expectations of their own that blow yours out of the water.

I originally heard of Shannon Yarbrough's Dickinstein: Emily Dickinson - Mad Scientist from Jerry Wheeler of Out In Print: Queer Book Reviews. He ranked it as one of his top 13 for 2013. Intrigued, I marked it as a To Read on Goodreads. Surprisingly, Mr. Yarbrough contacted me, offering me a copy of the book for an honest review. So note to self: you never know who's looking at what you post!

Other than watching the movie Abraham Lincoln: Vampire Hunter, I've had little experience with the monster mash-ups released over the last few years. While they seemed right up my alley, I just hadn't gotten around to reading them yet. I envisioned campy, tongue-in-cheek narrative where, in a fit of machismo, Mr. Darcy pulls out a weed whacker and goes to town on a bunch of the walking dead. That's what I expected from Yarbrough's Dickinstein, too. Well, not so much Mr. Darcy, but maybe Emily Dickinson running around like Madeline Kahn at the end of Young Frankenstein. Instead, what I got was a thoughtful, intelligent, and beautiful exploration of life and death, and faith and science.

In the book, a young Emily Dickinson receives a copy of Mary Shelley's Frankenstein and is fascinated by its premise. She decides to make a machine of her own - a "second life apparatus" as she calls it - to bring back the small, dead creatures she finds in her regular walks through nature. Successful with her experiments, she confides in a few close acquaintances. A couple of these confidants suggest that, with the help of her device, she might bring back a human being, something she'd not really considered before. This was her gift to nature; she'd not given much thought to playing God. But when a close friend dies unexpectedly, she finds herself willing to do anything to save them.

Yarbrough wrote Dickinson like he knew the woman - intelligent, witty, peculiar, and reclusive. I could easily envision the Dickinson in this novel as the prolific woman of letters history has shown her to be. Her love of nature, her fascination with death, her idiosyncrasies - they are all deftly handled by Yarbrough in his eloquent and poetic prose. His writing made me feel as if I was one of the fortunate few that Dickinson let in to her small circle of friends, walking the garden paths of the Dickinson Homestead with her and exploring the town of Amherst, Massachusetts by her side. It had the feel of a very private memoir. And each time I opened its pages, I felt as if I'd been given admission to her personal world. Dickinson's joys and fears, her insecurities and secret desires all played out beautifully on its pages.

Not satisfied with one style of prose, Mr. Yarbrough threw in a second, something more in the vein of Shelley's Frankenstein. I was surprised when he went all gothic on me for several chapters toward the end of the book as the plan to bring a human being back to life unfolded. It felt as if he was channeling one of the romantics for several thousand words. Then he finished the novel by returning to the quieter, more contemplative style from earlier in the book.


I kept gazing at that book until I could stand it no longer. I had to buy a copy.

What would be your mash-up? Twisted minds want to know.
Posted by Sioux Roslawski at 8:47 PM 15 comments:

Punch and Ponies and Progress---Oh, My!

Are you looking for some books for Christmas gifts? Would you like to actually put your hands on some books before buying them, to see if they're what you're looking for? Do you like punch and cookies?

This event involves lots of local authors, lots of books (for adults as well as children) and refreshments. And it's free. (Of course, just try leaving a book event without at least one book purchase under your arm. I dare you!)

(I am going to be stalking a publisher while I am there...)