An Unbelievable Movie, Snoring and Snorts and Back-of-the-Book Blurb # 93

For a couple of weeks, a friend and I planned on seeing a movie on Friday evening. She left it up to me. "Pick a good one," she said.

Well, the movie I chose has been out so long (unbeknownst to me), it was only showing at 1:00 in the afternoon. She suggested "Three Billboards Outside Ebbing, Missouri" even though she had already seen it. "It'll spark a conversation afterwards," she said. Did it ever.

If you haven't seen it yet, I highly recommend it. Frances McDormand does a phenomenal job. There's several twists. An open-ended ending. Some character growth that I'm going to contemplate for a while (because some of it makes me question something I've experienced).

Yikes. Friday is my fall-apart night. I'm tired all week and usually by Friday, I fall apart and end up falling to sleep by 8 or so if I'm home and on the couch. We ended up going to dinner and having a long, leisurely meal. I warned my friend, "I'll probably fall asleep. Poke me hard if you see me start to nod."

Well, she had to poke me at least once. I don't think I snored or snorted myself awake, but I didn't have the courage to ask. (She had already given me grief for my shoes. That night I wore Croc sandals, but I wore socks with them--not white socks. I didn't want to push things and get teased even more.)

Look at the photo below. That is the cover of your book. You choose the genre. Is it a coffee table book of fashion trends? Is it a photo collection of mentally-ill patients and their clothing choices? You decide.
Write an enticing blurb--150 words or less. (The title doesn't count in the word count.) Blurbs are those enticing bits that prod you into buying the book. Sometimes they're on the back cover of the book. Sometimes they're on the inside front cover. What they always try to do is lure you into purchasing the book.

Lisa Ricard Claro was the original creator of this writing challenge. She moved to Florida, and is too busy to host a weekly book blurb. Currently, she's hired a manatee to record her romance books. Those slow-moving creatures enjoy audio books and they need love just like everybody else. Lisa's first romance novel (she has three more), Love Built to Last, just came out as an audio book. (The one for manatees is slated to come out this summer.) She even has a brand new book out called The Write Man. If you'd like to read my review of The Write Man, you read it here.  It's a great read (and that's saying a lot, since I don't read romance novels).
Include your blurb in a blog post. Include a link to this post. Also, link your post to Mr. Linky. Mr. Linky is easy. If you've never done it, you'll be impressed with how simple he is. And then, check out the other blurb(s). It's interesting to see the different directions writers take, given the same photo. 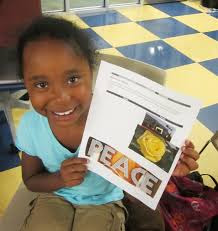 Ariel was only six. In first grade she was learning. She was figuring out how to add, how to share and get along with others.

Which made her wonder... Ariel's family talked about what was going on in the United States. People arguing and yelling with each other. Calling people from other countries bad names. Why can't everybody shake hands and hug and decide to just respect each other?

Ariel hates peas. She shoves them with her spoon into her pocket so she can later dump them in the toilet and flush 'em down. They're disgusting.

But peace? Peace is good thing. Peace is beautiful.

Ariel decides to right two wrongs at the same time. She made some signs. She's gone door-to-door. Now she's ready to take her campaign to the news stations, the newspapers... and the world.

And for Val and Pat and anyone else who wants to play along, here is the picture for next week: 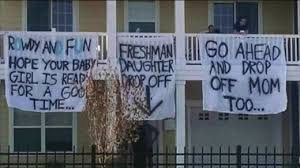