Perhaps you're not one of the hundreds of three people who've participated in this book blurb stuff. Maybe you're wondering what I'm talking about... If that's the case, read about how you join in the fun and find out exactly what it is:


If you enjoy reading them/writing them, you should check out Lisa Ricard Claro's website. She's the writer who first had this idea several years ago but got too busy with a 3-novel publishing deal, and had to give up the book blurb activity. You could write a gushing email, thanking her for inspiring someone else to take up where she left off but if you do, you won't

get a response. * Right at this moment, Lisa's cooling her heels in a jail cell, awaiting trial. What crime is she accused of? The authorities claim she did something horrendous... but something that every true writer has dreamed of doing.

Witnesses say that almost two months ago, Lisa assaulted James Patterson. Oh, she attempted to reason with him, during a book signing of all things, before she went completely over the edge. Hundreds of audience members heard Lisa shriek things like, "You aren't a writer," "What kind of writer just writes the outlines and lets dozens of other people actually write the book?" and "You ain't no writer! You're a fraud!" When Patterson just smiled at her and continued signing books (while one of his lackeys sat under the table, using Patterson's one paragraph "outline" to churn out yet another Patterson best-seller), Lisa took a book bag--full of all the drafts of her novels Love Built to Last, Love to Believe and Love to Win (with all the drafts together, the bag weighed 57 pounds) and she started swinging it at his head, as if she were a human windmill.

Patterson was taken by ambulance to an unnamed hospital. He was later released after getting stitched up. Thankfully for his fans, his check-signing hand sustained no injuries.
Enough. On with the blurb, that goes with this photo: 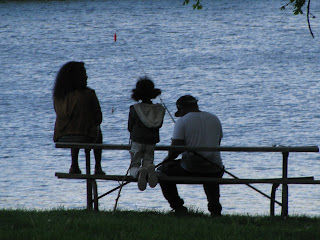 Hector used to be a construction worker. But when the construction business went bust, Hector had to humiliate himself and collect unemployment checks. His wife left. His pride disappeared. Hector was a broken man.
Having nothing else to do with his days, he started fishing. The act of casting out his line and sitting patiently, waiting... well, it calmed Hector down.
And then one day, a woman and her little girl came walking by. The little girl rushed over and started asking Hector a string of questions. He smiled as the young mother tried to apologize for the intrusion, as she tried to distract her curious daughter and get her to leave this nice man alone.
Fishin' For Love tells the story of how many times he cast his line, how many times Celeste avoided the bait, and if in the end, they both became hooked... (147 words)

Here is the photo for next week, if you'd like to try and work ahead: 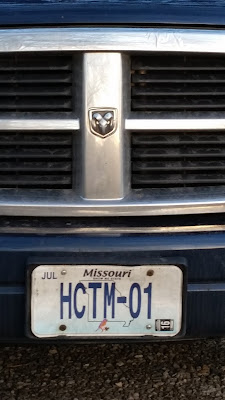 *Lisa is unfailingly kind and generous, so she wouldn't not respond because she's rude. However, people in jail cells don't get an overabundance of paper or access to computers, so her hands are tied--almost literally.

Bring Along Your Best Weapons...Plus a Giveaway

On Saturday I went to the St. Louis Listen to Your Mother show. Two writer friends were performing. Little did I know that a breathy, unknown-to-me storyteller would make me cry.

She brought to the stage her best ammunition:  her story. It was told honestly and simply, and chronicled getting a lung transplant from a young man named Kyle.

On Sunday I found a copy of one of my favorite books, George R. R. Martin's Fevre Dream. I found it at my favorite bookstore, Half Price Books (the Delmar one, baby--the fifth-largest one in the country!). It made me think of the battle that takes place in this novel (which is soooo much shorter than his G o T books). 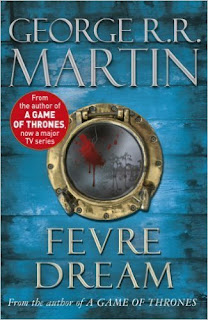 If I tell you there are vampires  in this book, don't be instantly dismissive. I don't read Anne Rice's novels (although perhaps I should). I definitely never did the Twilight books. Fevre Dream does have a vampire as a main character, but the story is so much more than thirsting after blood. It's the riverboat trade, indigo plantations, and a friendship between a riverboat captain and vampire.

I'm currently working (yes, still) on my WIP that's affectionately called my NIP (nightmare in progress). I hope I'm bringing my best ammo when I sit in front of my laptop. There's a part in Pat Conroy's South of Broad that brought my first-of-several epiphanies while working on this female-dog of a project. I thought I knew exactly where it was in Conroy's novel, I thought I noted the page number somewhere, I thought I remembered it clearly enough to mirror one single Conroy-crafted remark in my manuscript...

But apparently not, because now I've resigned myself to rereading the book and putting the page number on a billboard--'cause I don't want to prove true the "third time's a charm" phrase.

I began this piece of writing with several for-sures. I knew for sure who the main characters were--the WWWPs. I knew for sure how it would end. And in the writing, things have changed. The characters have become fictionalized, and the ending is not what I was planning on.

It seems the characters are in the driver's seat, not me.

If you tell me what is your best weapon as a writer (you can interpret that any way you want), your name will be put into a hat (a literal one; I don't know how to do those random-whatevers) for a copy of Fevre Dream. I'll draw names at the end of the month.