Both games (on Tuesday and Thursday) were nail-biters. I told a couple of the boys on the team, "You owe me a new box of hair dye, 'cause this game made my hair even grayer." It was back and forth, full of hopeful hearts and some disappointments. The boys won on Tuesday, but lost on Thursday, which made me think of writing (or life, really).

You can't let your disappointment impact your future. There were times that the boys got frustrated over a ref's call, or when they missed a shot. Their coach would have to get them back on the right track. Our writer friends do that. When we get despondent over a lack of a publishing contract or when our work gets rejected, other writers are there to encourage us, so we keep submitting. (You never know when that next "yes" from an editor will come along.)

Last night was my school's first fish fry of the season. I worked for a couple of hours serving up green beans, french fries and shrimp. It started out slow, but then grew to a crazy-long line. It ended up being like the childhood game "Telephone." The first person serving would get the order, serve the fish, tell the pasta person what to serve (red or white pasta) and give the tray to the pasta person. They would serve up the pasta and tell me what to put on the tray. I'd serve up the sides I was responsible for, and give it to the final person, letting them know if they were getting cole slaw or clam chowder. Last night, like most experiences, I connected again with my writing life.

You have to listen carefully. There are times when our writer friends give us some feedback. Some advice. We have to listen carefully, even if the advice might involve lots of work, and even when it's not something we want to hear. However, taking the time to digest the critique or the suggestion might result in a change that results in a piece getting published.


And now, onto book blurb stuff that I'm a day late with:

Look at the photo below. That is the cover of your book. You choose the genre. An informational book on farm animals? A romance between a cow and a handsome bull who's full of bull? You decide.

Lisa Ricard Claro was the original creator of this writing challenge. However, she's been busy for the last few years. A three-book publishing deal. Another novel (or two) in 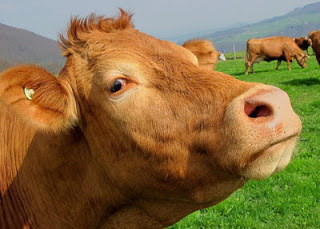 The Milk of Human Kindness:  A Mother’s Plea


Bess E. was the top cow in the field. The chief moooover and shaker.
She’d been in the pasture long enough to know something was up. Their calves would hang, not leaving since the milk was free, then they’d disappear. The babies would start getting a bit chubby, big trucks would rumble in, the crying cowlets would get shoved into the truck--never to be seen again.
Bess E. was determined to find out where all those calves were going. She put on her earring, twitched her tail around to get the dust off her flanks, and after trampling down part of the fence, headed on a journey.
What she finds out shocks her… and drives her to go back so she can warn the rest of her cow colleagues.
As she trots home, she keeps thinking, We need to go on strike. No more breeding until things change. (149 words)

And for the writer (and I'm talkin' bout you, Val) who likes to work ahead, here is the photo for next week: 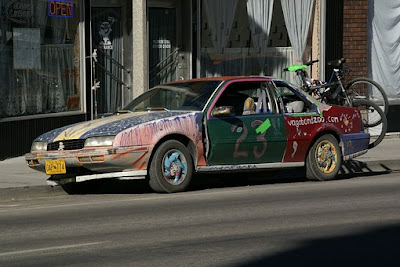 Posted by Sioux Roslawski at 6:35 AM 6 comments:

Four Reasons to Slow Down... and Stop 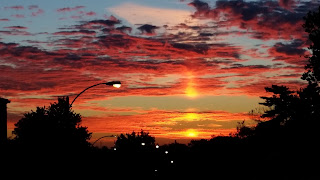 This was what the sky looked one early morning. I got out of my car and instead of heading into my school building, I looked in a different direction... and saw this sunrise. (I know my photography skills are laughable but it was a gorgeous sky.) The beautiful colors reminded me of one reason to stop occasionally:

You might miss something if you insist on always charging forward. The middle school boys had a big-deal basketball game on Saturday, part of a 52nd annual tournament my school hosts. Our team was behind by 20 points. They were younger and smaller than the other team and our basket had a lid on it.

I stepped out of the gym and into the hall to talk to a few parents. While I was gone, the game ended, and the boys had closed the gap to the point they were only 6 points behind. I'd missed it! (They have their second game tonight, and you can be sure I won't leave the gym for a single minute--not until the final buzzer sounds.)

You won't get to hear a story--it'll be gone forever. Yesterday I was in a bit of a rush to get to a meeting by 4. A student wanted to talk after school. That was cool--I still had plenty of time. But when I walked out, I saw a family that lives close to the school. They were out on their porch. I walked up their steps, meaning to just chat for a minute, and ended up talking for almost thirty minutes. In that short time, they asked, "What's the story behind your name?" (and I told them), they shared how mental illness has touched their family, I shared how it's touched mine... and if I hadn't stopped by, I would have missed out on feeling that sense of kinship.

You won't laugh as much. Savoring a joke, or responding with humor instead of frustration--that usually takes a bit more time. Definitely, however, the extra time is worth it.

Your belly won't get rubbed as much. Whoops. This one, I learned from Lizzie. Lizzie is a tripod who lives in my school's neighborhood. Usually she's on a walk when I'm getting out of my car, and I get to pet her. Lizzie knows what's important. As her mom is trying to coax her into continuing the walk, Lizzie knows it's more important to flop down into the grass and roll over so I can rub her tummy. Sometimes she decides to just lie down on the ground for a while and feel the breeze. Wouldn't life be more pleasant if we all lived life more like Lizzie?

And if you want to hear about the writing things I've learned from a television show I love, go here.

And how about you? What have you seen or enjoyed lately, that you would have missed out on if you'd rushed by it?